BattleTech: Our second game in AGES

I finally got another game in with my Brothers From Another Mother Dale & Ray tonight, and they came up with an ingeniously simple way to keep up with target movement modifiers instead of using a glass marker of where the ‘mech came from: Just put a single (small) six sided die next to the ‘mech with the number being the modifier to hit from its movement. If it’s a 0 just use a 6 to note it was activated. Simple and easy! Now this method will be an issue if you actually have vehicles that have the ability go more than 25+ hexes (which is a +6 to hit) a turn, but for 90% of the games out there this’ll do VERY well. 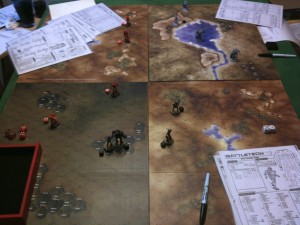 We played a 5000 battle value 4 mech per side 3-way game to ease into the rules a bit again (we’re so old school we remember the to-hit chart by heart even after 10 years of no-games 😉 ). We only got to play for about 2 and a half hours before Ray got called into work but we were almost done!

Firstly: The board we played on was too big for 12 mechs and the time we needed. Two maps would have been peachy instead of the 4 we used. We’re thinking that a 48×48 board with 2″ hexes would be pretty good for most competitive play (maybe even a 36×36″ board, same scale hexes)*.

We used my LanceMaker to create our forces (I know it’s a bit buggy, they didn’t even notice the bugs I noticed, but I’ll take care of that later) as I found it quicker to just add the models and get the record sheets we already had and print out our forces. We decided “NO clan” this round, although I feel confident that the Battle Value would have kept the forces very balanced.

We learned a lot, we knew most of it, there were some changes from last edition that I mentioned in my previous post that were relevant in the game.

The biggest thing that we all noticed that we just didn’t remember missing so much 15-20 years ago. The more we thought about it, the more we attributed it to the range of the table.