Ok I completely forgot about finishing my Objective Markers until last night. Right now they’re on 30mm bases and they should be on 40mm bases (both in most current tournaments and according to rumor for the next edition, despite the fact the Assault on Black Reach markers are 30mm bases).

This’ll give me a bit more room to put my “Eldar Beacon Antennas” and perhaps a little mini-MINI-diorama or maybe fallen space marines being shot at/cut or an Eldar casualty.

This is very far down on my list of todo, but still up there before I go. Since the beacons are already completed (yet on another sized base), a third of the work is done already — now it’s just a matter of painting up and getting ideas for 6 objective dioramas.

You can see one of the beacons (one of the front antennas from the Falcon Sprue that I had extra of thanks to the Wave Serpent Kits) in the photo below: 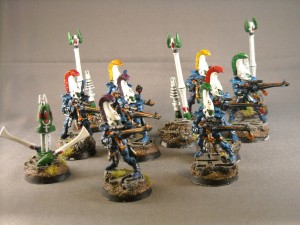